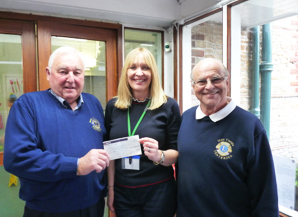 A wet afternoon in Wittersham did nothing to dampen the mood as Wittersham CofE Primary School headteacher Claire Frost welcomed Tenterden Lions Vice President Mike Caridia and Lion Barry Cheesmur to the school.  The Lions representatives proudly presented a cheque for £500 to be used towards the purchase of iPads.

“You wouldn’t believe the difference that this cheque will make to the school,” commented Claire Frost, as she posed for photographs with the Lions. “The children love to use technology to support their learning, with programmes such as Mathletics, Spellodrome and Times Tables Rockstars. This funding will mean that pupils won’t have to share screens, so they’ll get a real benefit from the resources now.”
The school was successful in their application for funding after expressing their need for iPads to the Lion’s Committee.  At a local level, the Lions serve the community by giving time and raising money.  Fortunately, the Lions saw that their funding would be well used in supporting Wittersham School’s project.
During their visit, Mike Caridia and Barry Cheesmur were taken on a tour of the school where they were amazed by the diversity of activity ranging from Mandarin Chinese, model spitfire building, Hinduism and rain-enforced indoor Kwick Cricket.  They said they had no idea that the school did all this.”  Mike Caridia was surprised by an impromptu high-five from a very thankful pupil as they toured from class to class.
All in all, a delightful visit and a great opportunity to forge links and give thanks to Tenterden Lions Club.